Somalia’s 2022 Famine Is Predicted and Preventable

Somalia is in the throes of its worst famine since 2011, but there is still time to avoid past mistakes and prevent further deaths and suffering. Quick action now can save lives—and the last decade of famine response provides essential lessons moving forward. 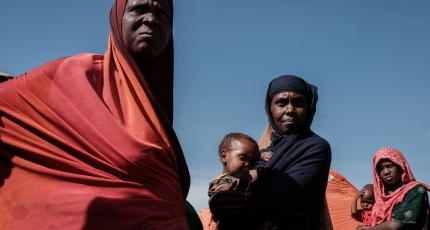 Photo Caption: Women wait for water to be supplied at Muuri camp, in Baidoa, Somalia. Photo by Yasuyoshi Chiba (AFP)

MOGADISHU, Somalia - On July 20, 2011, the UN declared famine in two regions of South-Central Somalia. The famine’s impact was devastating. Over a quarter of a million people—half children under five—died between October 2010 and April 2012. The international community had two years of warning about what was to come. But they did not act in time. Donors pledged that they would never again let this happen. During another major drought in 2017-18, they adopted a “No Regret” funding posture that prioritized speed over caution. The “no regret” posture worked—and prevented the drought from metastasizing into famine.

But, as history tells it, donor speed is not the only complicating factor in response to famine in Somalia. In 2011, Al Shabaab controlled almost all the areas of Somalia affected by the famine. As a U.S.-designated foreign terrorist organization, humanitarian delivery to famine-stricken areas controlled by Al Shabaab was difficult. Humanitarian agencies were caught between Western countries’ onerous counter-terrorism law requirements to prevent Al Shabaab from benefitting from humanitarian aid and Al Shabaab's stringent requirements for humanitarian agencies working in regions under their control. As a result, many humanitarian groups stopped delivering aid in Al Shabaab-controlled areas. In mid-2011, at the height of the famine, Al Shabaab escalated its hostility and routinely expelled, attacked, extorted, and harassed aid groups. In late November 2011, they banned sixteen aid agencies, including the World Food Programme, from operating in the regions under their control. The international community couldn’t get aid to starving people—and the need for another approach was evident.

Flash forward to today, and the history of 2011 is repeating itself. Starting in October 2020, the World Meteorological Organization (WMO) warned that rainfall in Somalia would be below average. Despite warnings and amid a tepid donor response, intense drought has again led to Somalia’s famine. Roughly 7.1 million people in Somalia need food assistance, and 230,000 live in famine-like conditions. According to UNHCR, Somalia recorded the one-millionth person displaced in Somalia due to the drought in August. And while Al Shabaab does not control as much territory as it did in 2011 and is not strong, they are still a formidable military player in Somalia.

To stave off the worst, donors must look to these lessons of the past. They must take on the “no regret” funding posture of 2017-18 and fully and quickly fund the Somalia Humanitarian Plan. Additionally, the United States and the European Union should create humanitarian counter-terrorism carve-outs to allow humanitarian agencies to provide aid to people in need in Al Shabaab-held territories.

Funding needs to come in fast. The Somalia 2022 Humanitarian Response Plan requested $1.46 billion; however, only 43 percent of that has been funded. The United States is the chief funder of Somalia’s humanitarian plan and has contributed nearly $707 million in humanitarian aid for the people of Somalia in 2022. However, other donors have not stepped up. During the 2016-2017 drought in the Horn of Africa, the UK’s Department of International Development gave under $1 billion. This year, the UK has only committed $ 2,354,160 to Somalia—a drop in the ocean compared to the needs.

The reality is that the ongoing war in Ukraine has diverted donor resources and attention away from Somalia and other countries in the Horn of Africa. Ukraine, which represents 5 percent of the world’s humanitarian needs, has received 20 percent of global aid this year. The Ukraine conflict has also threatened commercial grain supplies in the region amid the famine. Somalia imports over 90 percent of its wheat from Russia and Ukraine. Donors should fund the near-famine conditions in Somalia with the same urgency they did in response to the Ukraine war.

While funding is critical, the funding’s nature and the timing can make a huge difference.  A study commissioned by USAID in Somalia demonstrates that a proactive response to avert humanitarian crises could reduce the cost to international donors by 30 percent while protecting billions of dollars of income and assets for those most affected. Additionally, flexible multi-year funding mechanisms allow for greater predictability and continuity. It also engenders the ability to anticipate, prepare, and respond to a humanitarian crisis like Somalia.

The situation is dire. Somalia’s newly elected president’s first act was appointing Abdirahman Abdishakur Warsame as the Special Envoy for Drought Response. The international community needs to match that urgency with increased and flexible funding. Failing to do so, despite adequate warnings and past lessons, is unconscionable.