After formally inviting the federal government of Somalia to attend Hadrawi's burial, the ministry of internal affairs of Somaliland retracts its invitation. 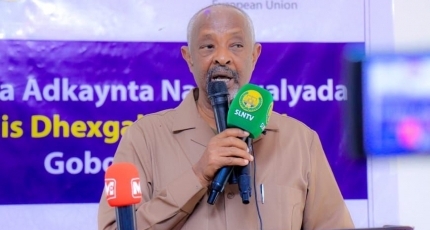 HARGEISA, Somalia - Reports that the leaders of the federal government of Somalia were invited to the funeral of the nation's most renowned poet, Mohamed Ibrahim Warsame Hadrawi, have been rejected by officials from the breakaway province of Somaliland.

Somaliland's Minister of Internal Affairs Mohamed Kahin Ahmed said yesterday, "We welcome, we provide permission, and we also thank them," in response to a direct question on whether Somaliland would permit Somali federal politicians to attend Hadrawi's funeral.

Minister Kahin said in a statement on Thursday night that he did not offer a formal invitation to the leaders of Somalia's federal government and that the media misinterpreted his earlier message in an effort to walk back from the official invitation.

Hadrawi, who wrote several well-known patriotic and love songs and was considered the best poet of the generation, passed suddenly on Thursday in Hargeisa.

His poetry was translated into various languages.

He will be remembered as one of the pioneers of Somali poetry and some called him the Shakespeare of Somalia as his poetry has been translated into various languages.

In addition to love lyrics, he was a powerful commentator on the political situation and critic of the then-military regime in Somalia. Imprisoned between 1973 and 1978.

He was Poet, songwriter, and Philosopher. In 2012, Hadraawi was awarded the Prince Claus Award for his contributions to peace through his poetry.