U.S. Embassy in Uganda Warns of ‘Specific Threat’ to Airport

KAMPALA (KON)-A day after the announcement of heightened security measures on United States-bound flights, the American Embassy in Uganda said Thursday it had been warned of a “specific threat” of attack to the country’s main airport and said travelers “may want to review their plans.”
News Keydmedia Online
4 July 2014 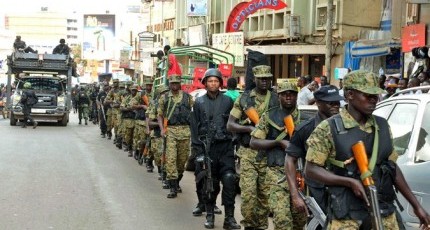 The warning was one of several recent alarms in restive East Africa, where governments have sought to counter threats, particularly those by the Shabab militant movement based in Somalia.

It was not clear if the Ugandan concerns were linked to the plans, made known by officials in Washington on Wednesday, for tightened passenger screening on many flights to the United States from Europe, Africa and the Middle East. The measures followed intelligence reports of an increased threat from Al Qaeda’s affiliate in Yemen.

The embassy did not specify what the threat entailed, but said it had received information from the Uganda Police Force that, according to intelligence sources, “there is a specific threat to Entebbe International Airport,” which serves the capital, Kampala, 25 miles away.

The warning, in a statement on the embassy’s website, said the attack could take place between 9 p.m. and 11 p.m. on Thursday. That period elapsed without any reported incident.

Uganda has troops in Somalia fighting the Shabab as part of an African Union force and has been on alert in case that involvement draws reprisals. In 2010, the Shabab claimed responsibility for attacks on bars in Uganda where people had gathered to watch World Cup soccer games. Dozens were killed.

Elsewhere in the region, Kenya has blamed the group for attacks that include last year’s bloody assault on the Westgate shopping mall in Nairobi, which killed at least 67 people.

According to Agence France-Presse, a Ugandan Army spokesman, Paddy Ankunda, said on Thursday that troops had been deployed at the airport and in the capital.

“People must be vigilant in the face of this threat, report any suspicious individuals seen in their areas,” he was quoted as saying, calling on citizens to “stay calm and alert.” News photographs from Kampala showed a line of security personnel in camouflage fatigues carrying assault rifles as they patrolled the city.

In Washington, officials said on Wednesday that heightened security arrangements for planes flying to the United States would be introduced at about 15 foreign airports. The Department of Homeland Security told airlines and overseas governments about the measures, but has not disclosed details publicly.

Secretary Jeh C. Johnson of the Department of Homeland Security said in a written statement that the measures would be “both seen and unseen” and would evolve as situations warrant.

The move was interpreted as the latest sign that Al Qaeda in the Arabian Peninsula, an extremist group based in Yemen, was plotting against a United States-bound airliner. Since 2009, three of its plots using bombs carried by operatives or hidden in cargo have been foiled.