Uganda Sends Additional Troops to Somalia amid war on Al-Shabaab

The Uganda People's Defense Forces (UPDF) has sent a total of 1556 peacekeepers to Somalia to replace an equal number of fighters who have been recalled from the battlefield after serving for one year. 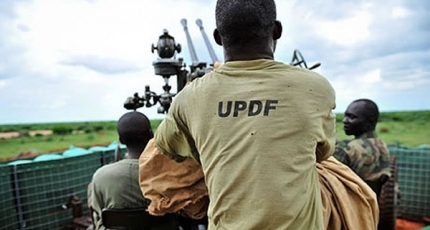 KAMPALA - The Uganda People's Defense Forces (UPDF) has sent a total of 1556 peacekeepers to Somalia to replace an equal number of fighters who have been recalled from the battlefield after serving for one year.

The Uganda People's Defense Forces (UPDF) has sent a total of 1556 peacekeepers to Somalia to replace an equal number of fighters who have been recalled from the battlefield after serving for one year.

The troops under UGABAG XXXVII were flagged off by the Chief of Defence Forces, Gen Wilson Mbadi at the Peace Support Operations Centre, Singo in Nakaseke district to replace UGABAG XXXIV.

Speaking to the troops, Gen Mbadi applauded partners for supporting the UPDF in its pre-deployment training to ensure the soldiers are fit for the job.

He on the other side urged soldiers to be patriotic and disciplined as they execute their duties in Somalia.

"You have been ably trained and we are satisfied with your readiness, we ask for nothing else but exceptional performance. The Somali people have their own culture and this is the reason why you undergo vigorous training before you step foot in Somalia therefore, work harder to consolidate your predecessor's achievements," Gen Wilson said.

He implored the battle group commanded by Col Charles Asiimwe to save their mission allowances with the UPDF SACCO, and use it well to prepare for their future retirement journey.

He urged the officers and men to strictly degrade Al-Shabaab so that the Somali army can take over the responsibility that the troops are undertaking on behalf of the African Union (AU) for peace and security in Somalia.

Gen Mbadi applauded the local leadership for the peace and harmony that has helped in securing Uganda which has allowed the country to survive and grow.

The UPDF Commander Land Forces Lt Gen Kayanja Muhanga cautioned soldiers against reckless behavior that would expose them to diseases like COVID-19 and HIV/AIDS which still exist.

"This army is built on a bedrock of ideological orientation to produce cadres who will remain cautious while doing their work."

Gen Muhanga added that the mission calls for professionalism and discipline at all levels while diligently executing their duties.

"The Centre remains focused on achieving its mission of conducting pre-deployment training to troops to enable them to participate in multinational peace support operations."

He applauded the instructors and support staff for having achieved the training objectives.

"We expect both groups UGBAG XXXVII and UMUMT to display a high standard of discipline and exhibit professionalism and by the end of the tour of duty, to participate in the lesson learned workshop. You are leaving Uganda to go add a productive stone to the stability of Somalia which will, in the long run, add to the total stability of the African continent. Strive harder so that those who judged us by our heights will remember the depth from where we started the mission."

Uganda was the first country to deploy troops to Somalia under the African Union Mission in Somalia in 2007 and helped bring sanity to the country.

The entry of UPDF in Somalia saw other countries follow suit.

After the end of its mandate this year, AMISOM metamorphosed into the African Union Transition Mission in Somalia(ATMIS)which is mandated with stabilizing Somalia but also aims at transferring the full responsibilities of national security to the Federal Government of Somalia.