As neighboring countries welcome thousands of fleeing Ukrainians, the experience has not been the same for foreign students and refugees of color. 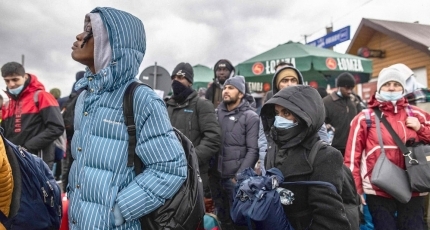 For the hundreds of thousands of people that have fled Ukraine so far, the experience has in some cases been very different depending on the color of their skin. African and South Asian students studying in Ukraine have reported racial discrimination, including being pushed by Ukrainian border guards to the back of the line to let Ukrainians pass. One medical student from Ghana told the Globe and Mail that she spent nearly two days waiting in line, in the cold, with no food, and watched border guards repeatedly hit a man who tried to cross the border. Ukrainians shouted at her and other Africans to “go back,” she said.

Other Africans in Ukraine said they were forced off trains and buses to make room for Ukrainians, and had to walk to the border. A Nigerian man who has lived in Ukraine for over a decade told The Independent that when he tried to board a bus to flee, he was told, “No Blacks.”

Asya, a medical student from Somalia who had been studying in Kyiv, told the BBC that when she finally was allowed to cross into Poland, she was told “accommodation at the hotel was only for Ukrainians.” When she reached Warsaw, however, she said that she was given a free place to stay and a warm welcome. Poland has said that everyone is being allowed to cross from Ukraine, regardless of their nationality.

Most of the reported challenges, so far, have been on the Ukrainian side of the border. (Ukraine, for its part, has said that the problems are due to the general chaos and number of people trying to cross at one time, and that foreigners are free to leave; not all foreigners leaving Ukraine have reported facing issues, either.)

But the differing experiences point to problems in Poland, Hungary, and other countries in the region. At the same time that Ukrainian refugees are being welcomed—given tea and food, often picked up by volunteers who drive them to a place to stay, and directed to a website set up within hours of the first Russian attack to help refugees navigate asylum claims—refugees from elsewhere, who have fled from Afghanistan, Iraq, and Syria, are still being held back. Countries like Poland have been resisting refugees from the Middle East since floods of people began fleeing Syria in 2015.

Some who made it through the Belarus border on their way to Poland in recent months were forced back by Polish border guards. Others managed to escape into a Polish forest, where many have frozen to death. Some Polish families have broken the law to hide asylum seekers in their own homes. But the government’s stance is clear: Not only are Middle Eastern refugees not welcome in the country, nonprofits have been banned from giving them any humanitarian aid. At the beginning of this year, Poland began building a $400 million wall along the Belarus border to keep migrants out. Meanwhile, Ukrainians, and their pets, can cross the border without paperwork.

There are additional factors at play in Belarus, including the way that country has used migrants from Syria and elsewhere as political pawns amid accusations that Belarus has “threatened” the EU by helping migrants reach its borders. But “at the end of the day, it has to be a humanitarian response, and it should not be political,” Daphne Panayotatos, the advocate for Europe at the nonprofit Refugees International, a research and advocacy organization, told Fast Company in a recent interview.

There is a risk, she says, that as the number of refugees from Ukraine swells, entry will become even more restricted for everyone. For the thousands of African and Indian students studying in Ukraine, that could even affect their goal to get home: Nigeria, for example, is now sending buses to border points to pick up its citizens, and coordinating flights back to Nigeria. There are others, of course, who want to stay in Europe. And all the while, Syrian refugees still need aid. Panayotatos’s hope, she says, is “that we see [the reception given to Ukrainians] become the norm, rather than the exception.”