Mogadishu (Keydmedia) - The traffic signs are not the only things coming up in Mogadishu. After decades of war that reduced the Somali capital almost to rubble and banished all semblance of normalcy from the streets, there are now rumblings of awakening, much as they may resemble a drunkard rousing themselves from a deep stupor.
News Keydmedia Online
22 January 2012
The constant drone of cement mixers can often be heard as the reconstruction of shelled buildings picks up and many damaged structures get a much-needed facelift.

Indeed the phrase “property development” is now beginning to be used in public discourse, albeit hesitantly.
The marketplaces are fast springing to life, struggling to come to terms with the bustle of enthusiastic traders who are usually up at every sunrise.

Previously sleepy trading centres such as Hamarweyne in the city centre and the long-abandoned Sinai in northern Mogadishu are packed with sellers and shoppers, despite the ever-present fear of suicide bombers who could materialise in this disorderly mix.

Even the badly affected Bakaraha market, the largest trading centre in Somalia, looks to have come to terms with months of shelling and street warfare, and is now home to a cacophony of trading activities.

Ordinary street junctions like Banadir and Zoppe in southern Mogadishu have become strategic bases for merchants of popular commodities like khat, the stimulant herb widely chewed in Somalia.

Fundamentalist fear
Women, who dominate the lucrative khat retail trade, hog the limited space on the kerbs while addicts and regular buyers of the “green stuff” mill around them.

It has not always been like this for a long time. Al-Shabaab, the extremist militant group allied to Al-Qaeda, had sucked the life out of the city and instilled fear through a fundamentalist interpretation of Islam.

But a combination of pro-government and African Union Mission troops finally pushed them out of the city, leading to their sudden withdrawal from key positions at dawn on August 6 last year.

Since then, a new lease of life has been apparent in the city, including in the seemingly reinvigorated air.
Lido, a kilometre-long strip of sandy beach, has turned into a magnet for swimmers and sightseers, while even the small rocky Hobaal and Gellaq ponds in Hamarweyne district have not been spared either by the happy invaders.

Sports has not been left behind. The CONS stadium was once used as a military fortress and training ground for the militants, with its pock-marked surfaces bearing the brunt of the manoeuvres.

But recently it hosted Mogadishu’s inter-district football games. National federations in the Somali Olympic Committee have also been competing to hold tournaments.

“In May, we are going to hold a selection tournament,” the president of Somalia’s Karate and Taekwondo Federation, Aweys Mohamed Abati alias Aweys Orfeo, proudly told Africa Review.

“The very good ones will join the national team ready to represent Somalia in any event, local or foreign.”

This growing optimism in the city’s prospects and recovery is evident in the number of people streaming back. Most have been coming in through the Mogadishu-Afgoye corridor, a strip of land of about 30 kilometres south of the capital.

Having spent at least three years in makeshift shelters, the returnees look to be driven by an immense desire to renew their lives by joining the city’s emerging vim and vigour.

The city’s regained visibility is so evident that diaspora Somalis are now taking all hotel rooms and guest houses. Their very presence suggests that they are eying opportunities to invest their considerable capital and expertise in various fields.

“It is good that they are coming back to a city gradually regaining its life and identity,” said Ali Fidow Nur.
But it is the small things that best espouse the revival. “I was only a year old when the traffic lights disappeared from the city streets,” says 21-year-old Abdi Abdullahi alias Abdielaay, a ‘Caasi’ (minibus) driver in Mogadishu.

“We are happy that the rule of law is returning to the roads,” said Mr Abdullahi.

For many Somalis, this could be a harbinger of even better days to come. 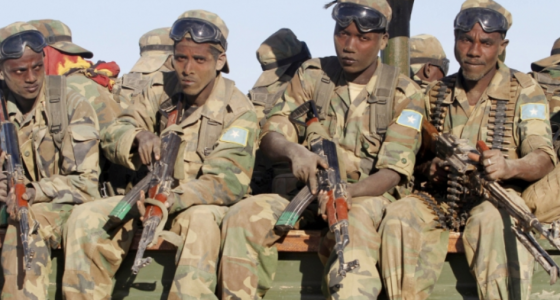