What is going on in Gedo region?

They said that 22 August will be election day for Jubbaland state and the deadline is invariable. 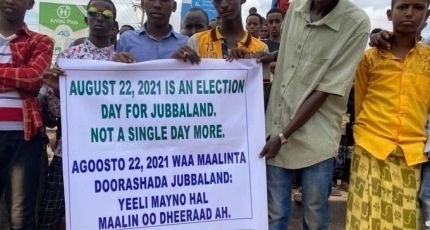 MOGADISHU, Somalia -- While the ongoing election conference could be the turning point in the country’s political stalemate, the Gedo region has remained the focal point of the discussion, according to some analysts.

The region has seen some of the worst political power gain games ever in recent history with the outgoing leader hailing from the dominated clan of Marehan determined to set his people separated from the rest of Jubbaland state.

In his own eyes, Gedo should be administered by its people, not any other figure who favors another clan – and Ahmed Madobe is precisely that man.

The people of Gedo took to the streets to protest against Madobe at a time of his participation in the election conference going on in the capital to reject his representation in the process of elections and the fate of the region as Jubbaland leader.

They said that 22 August will be election day for Jubbaland state and the deadline is invariable.

The outgoing leader is said to have trained troops for the region during his stay in the office as a legitimate president getting rid of the administration Madobe has nominated for Gedo and replaced with a new administration.

The former Security Minister of Jubbaland, Abdirashid Janan who has defected to the government troops after being offered 2.3$ million in return stays in the capital Mogadishu.

With the defection of Janan becoming a slap in the face to Madobe’s power in Gedo has ended the battle for Gedo control.