A military coup attempt in Somalia by outgoing president

It's the second time this year, the outgoing leader suspended the PM from his executive powers in the latest attempt to stage a coup in Somalia. 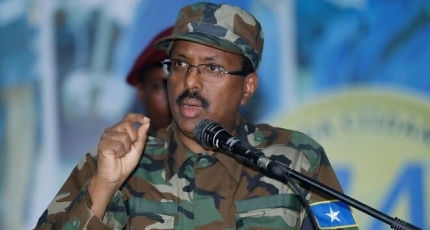 I condemn the military coup attempt by the former president," says Hassan Sheikh who leads the opposition alliance.

Mohamud added that the people are awake and vigilant of another coup in the country after more than two decades of state-building. He urged the public to protect their democracy.

I call for the protection of the democratic rule of law and the support of the Prime Minister for the finalization of the ongoing elections in the country.

The remarks by ex-leader come hours after Farmajo announced he suspended PM's powers, citing corruption allegations. The move sparked military build-up and tension in the country.

For his part, the 7th president Sharif Sheikh Ahmed said actions by Farmajo are provocative and could lead to further political turmoil at a very delicate moment for Somalia.

We call on him to refrain from such acts and allow the Prime Minister to implement the elections as agreed.

The U.S. embassy in Mogadishu has urged Somali leaders to take immediate steps to de-escalate tensions in Mogadishu, refrain from provocative actions, and avoid violence.

The rift between the leaders began after the presidency issued a statement late on Sunday night, in which Farmajo accused Roble of abuse of public land and suspended his power.

The power struggle between Farmajo and Roble was dragging on for months with each side fighting for election control, threatening the stability and state-building efforts in Somalia.