After ICJ ruling, Uhuru says Kenya won’t give up ‘one inch’ of territory

Kenya announced it will not recognize the ICJ October 12 verdict on the the maritime border dispute with Somalia, creating a new circle of diplomatic spat. 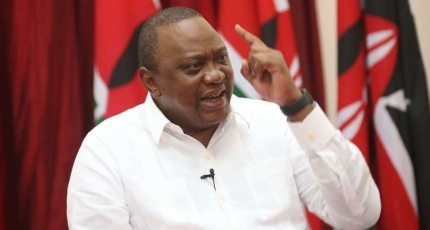 President Uhuru at a past interview. PHOTO | FILE NMG

NAIROBI, Kenya - In his speech during the Mashujaa Day on Wednesday, Kenyan President Uhuru Kenyatta has sent a message to Somalia after the ICJ's ruling on the sea border spat.

Kenyatta has warned that the Oct 12 decision by the UN Court could damage always shaky diplomatic relations between Kenya and Somalia and would result in negative consequences.

"Kenya is committed to peace but will not give up "even one inch" of territory to anyone or country," President Uhuru has said.

Kenya and Somalia have been embroiled in a long-running maritime boundary dispute which led to reaching the relations at the lowest point with the shut down of embassies this year.

The International Court of Justice ruled largely in favour of Somalia in its sea border tiff with Kenya, ending an 11-year circle of the standoff. Nairobi wanted an outside court resolution.

The decision angered Kenya, which refused to comply, arguing the Court had no jurisdiction in the maritime case. Kenya skipped ICJ's March hearing and the current verdict has no appeal.

The new boundary lines include an exclusive economic zone [EEZ], which is said to contain deposits of oil and gas. One of the oil blocks is on the Kenya side, with 4 on the Somalia side.