He said the Somali government is committed to combating illegal fishing by foreign companies in Somali waters and will work with the Somali Ministry of Fisheries. 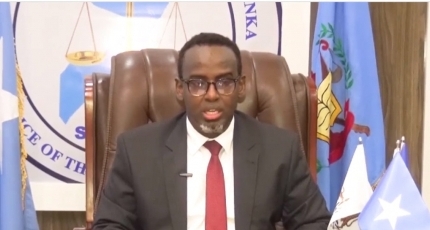 MOGADISHU, Somalia - The Attorney General of Somalia Suleiman Mohamed said there are foreign governments and other companies still doing extensive illegal fishing in Somali waters with the support of local authorities.

Mohamed said the Somali government is committed to combating illegal fishing and take legal action against the foreign companies after the Somali Ministry of Fisheries became corrupt.

He added that illegal fishing is one of the major problems in the country's untapped marine resources and that foreign fishing companies are taking advantage of the lawlessness.

The AG called on the weak Somali Navy to arrest foreign vessels fishing illegally off the coast of Somalia. This comes after top government officials are involved in the lucrative business.

According to the Global Initiative report released in July 2021 following the steady decline in attacks by Somali pirates since 2012, foreign fishing fleets have gradually returned to Somali waters. Many of these vessels, particularly those originating in Iran, Yemen, and South East Asia, routinely engage in IUU (illegal, unreported, and unregulated) fishing practices.

In early March 2020, the secretary for the FGS Minister of Fisheries and Marine Resources Abdullahi Bidhan Warsame transmitted seven signed and stamped catch certificates for NEFCO to the director-general of the ministry, Mohamoud Sheikh Abdullahi Abdirahman, who subsequently passed them on to Mohamud Hayir Ibrahim.