Galmudug state leader failed in the security and the fight against Al-Shabaab after spending most of his time staying in Mogadishu for Farmajo's interests. 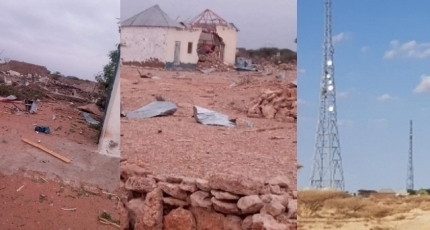 The gun-toting militants have peacefully seized control of El-dhere, small but a strategic town that lies about 30Kms east of Dhusamareb, the Galmudug capital.

Al-Shabaab blew up the town’s key structures, including the police station, the administrative headquarters, and the court complex using IEDs, according to a resident.

The terrorists withdrew from the area following a brief control and retreated back to Bulacle, a nearby Al-Shabaab stronghold located on the outskirts of Dhusamareb city.

Galmudug forces were reportedly regained control of the village after Al-Shabaab's exit and began military movement to ensure the security of the regional capital.

Al-Shabaab has on Tuesday captured Mataban town in the Hiran region, central Somalia which was under Galmudug control. The group left the key district on the same day.

Galmudug faces a security crisis as Villa Somalia is accused of meddling in the state’s affairs. Mogadishu sent forces to the region during an anti-ASWJ offensive in October.

Galmudug state leader failed in the security and the fight against Al-Shabaab after spending most of his time staying in Mogadishu working on Farmajo's re-election comapign.