Al-Shabaab has claimed the responsibility for the attack which came hours after gunmen raided Mogadishu airport, a heavily fortified facility in the capital. 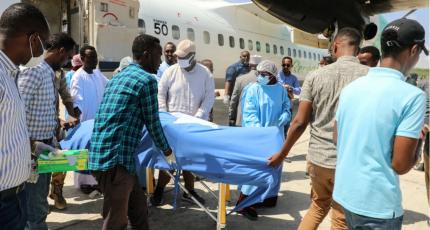 BELEDWEYNE, Somalia - The death toll from twin suicide blasts in Somalia's central town of Beledweyne on Wednesday night has climbed to 48, according to HirShabelle state president.

Speaking at a press conference on Thursday, Ali Gudlawe Hussein 108 people sustained wounds in the bombings targeting parliamentary candidates walked out of his residence in the evening.

We lost 48 people in the terrorist attack. I offer my condolences to the families and friends of the loved ones who perished in the heinous and cowardly acts. I wish you a speedy recovery,' he said.

The dead, include Amina Mohamed Abdi, a fierce critic of Farmajo who was known for her advocacy for justice of slain NISA cybersecurity expert Ikran Tahlil killed within the spy agency in 2021.

Her killing raised questions and suspicion that it was a politically motivated assassination engineered by Villa Somalia since the female MP was fighting for the arrest of the Ikran Tahlil's killers.

Gudlawe called on the police to reinforce the security in the city, about 350 kilometers north of Mogadishu, where elections for 25 Lower House seats have been taking place since early this month.