Deni and Madobe decline to attend the conference at Afisyoni

The two also acting as representatives for the opposition candidates who want talks should be so openly participated in a transparent way rather than to be based on signing the agreements. 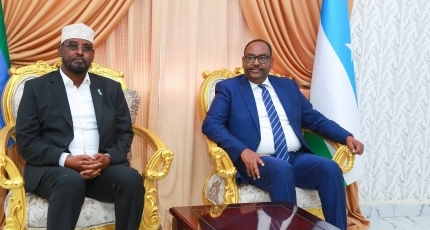 MOGADISHU, Somalia - The leaders of Puntland and Jubbaland have declined to attend a meeting on the electoral crisis in Somalia that kicked off at Afisyoni inside Aden Abdulle International airport on Monday.

They said their boycott came after denouncing the unilateral agenda of the conference published by the office of the outgoing president last night. Ahmed Madobe and Deni demanded Farmajo's handover of power and allow the PM to organize the meeting.

Farmajo, his acting caretaker PM, Mohamed Hussein Rooble, and leaders of HIrShabelle, Galmudug, Southwest State, and Mogadishu mayor have already attended the conference without the presence of Madobe and Deni.

Farmajo wants the forum to focus on the poll agreements reached on 17 September 2020 while the leaders of Puntland and Jubbaland demanded to include all parties in the dialogue.

"Farmajo must attend the talks as a candidate just like any other candidates since his term as President ended last month," they said.