Yet, improvements in data management, with the assistance of the International Monetary Fund, may help lure foreign investment, Abdullahi said. 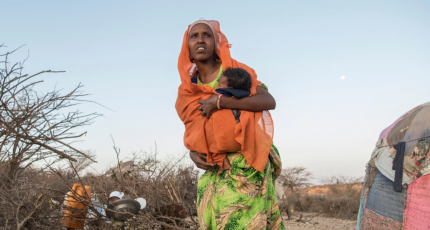 Fathiya Muhamed, holding her child, left her village north of Hargeisa looking for water and pasture after the drought - AP

MOGADISHU, Somalia - A devastating drought weighing on Somalia’s economy is poised to push inflation close to 10%, the highest level in more than 15 years, by the end of the year, according to central bank Governor Abdirahman Abdullahi.

The Horn of Africa nation is experiencing its worst drought in four decades, which has started threatening lives and farming activity. More than 7 million people, about half the population, are in need of food aid.

“This is likely to affect the agriculture industry and those whose livelihood depends on” it, Abdullahi said in an emailed response to questions. Livestock “in Somalia’s primary foreign-exchange earner, so the economy will feel this hit in the immediate term,” he said.

Inflation is likely to accelerate in the second half of the year, after reaching 6.7% in May.

An Islamist insurgency that’s disrupted production and Russia’s invasion of Ukraine has exacerbated food shortages -- the country relies on the two countries for more than 90% of its wheat imports. A new government, after more than a year of electoral delays, prompted the US to renew efforts to help fight militants in Somalia, raising the chances of ending the conflict.

The drought “will push the Somali people further into poverty,” the governor said. “Around 7 out of 10 people survive on less than $2 per day and the government does not have fiscal policy space to intervene with the provision of a financial safety net.”

Yet, improvements in data management, with the assistance of the International Monetary Fund, may help lure foreign investment, Abdullahi said.

“There are positive signs that the economy can be on the upturn again with Somalia’s financial data being incorporated into the IMF’s e-GDDS platform,” he said. “This will allow policymakers to formulate favorable policies that can attract foreign direct investment and it will also give international investors reliable data that can help them in their planning to potentially invest.”