The minister of planning Mohamud Bene-Bene is also in attendance at the policy-level discussions which centered on Somalia's economic reform program with the IMF. 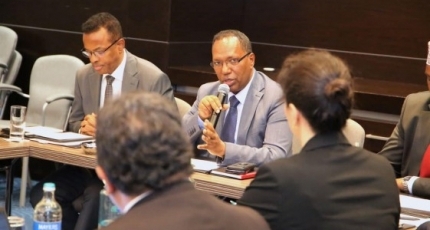 MOGADISHU, Somalia - To qualify for the long-running $5bn external Debt relief, Somalia is working around the clock to commit to a range of broad economic reforms, including increasing domestic revenue.

The IMF praised Somalia’s efforts at a six-day meeting in Nairobi with the new finance minister Dr. Elmi Mohamed Nur and other officials, including the governor of the central bank Abdirahman Mohamed.

The minister of planning Mohamud Bene-Bene is also in attendance at the policy-level discussions which centered on Somalia's economic reform program with the IMF.

“All of the government stakeholders are participating & we will work together to find ways to further strengthen our economic future,” said Dr. Elmi in a Twitter post on Sunday.

For the past two years, Somalia took necessary steps in debt relief, a key move that will allow the country to clear its $5.2 billion in external debt with the support of the IMF and the World Bank.

The debt is owned by Somalia’s Paris Club creditors - including the US, Russia, Italy, and France.

Last July, the World Bank approved a $100 million grant to support the continuation of Somalia’s reform efforts in reaching the Completion Point of the Heavily Indebted Poor Countries (HIPC) Initiative, when the country will be eligible for full and irrevocable debt relief.

Somalia has been making intense efforts that had laid the foundation for inclusive economic growth with the IMF underscoring the need for Somali authorities to sustain and implement their reforms.