Drought-ravaged Somalia in need of funding to avert crisis: envoy

On Monday, she said that Britain actively participated in a round table meeting in Geneva that was convened to draw attention to the drought situation across the Horn of Africa and particularly in Somalia. 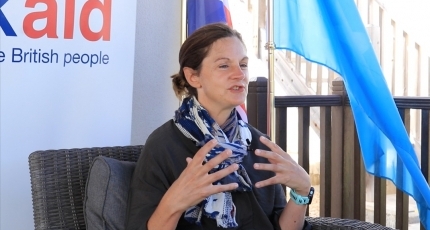 MOGADISHU, Somalia - The Horn of Africa, especially Somalia, has been severely affected by drought and is in need of urgent funding for humanitarian support, UK Ambassador to Somalia Ms Kate Foster has said.

On Monday, she said that Britain actively participated in a round table meeting in Geneva that was convened to draw attention to the drought situation across the Horn of Africa and particularly in Somalia.

The high-level round table in Geneva was co-hosted by the United Nations Office for the Coordination of Humanitarian Affairs (OCHA) and the EU’s Civil Protection and Humanitarian Aid Operations (ECHO), with the participation of senior representatives from the Governments of Somalia, Kenya and Ethiopia.

Attendees pledged for more funding to alleviate a crisis in the Horn of Africa.

Ms Foster anticipated that the meeting will produce funding that can respond to the needs of more than 15 million people in the Horn of Africa, mentioning that the humanitarian agencies have asked for $1.5 billion.

Amb Foster said representatives visited a camp on the outskirts of Baidoa town, 240 km southwest of the capital Mogadishu, to get a first-hand experience of the consequences of the devastating drought.

“[On Sunday] we visited some people that are affected by the drought at the outskirts of Baidoa,” said UK Minister for Africa Vicky Ford, who attended the meeting virtually.

“We were able to see big water dam that this time last year was full of water and is now completely empty.”

She said the aid package to “provide vital services to almost a million people across the country, including food and Water, Sanitation, and Hygiene (WASH) support, as the country teeters on the brink of widespread famine.”

In Geneva, the UN humanitarian chief Martin Griffiths said, “Once again, vulnerable people across the Horn of Africa are falling victim to the cruelty of acute hunger and potential famine in a crisis that is not of their own making.

“We must all step up and show the people of this region that we are here to help alleviate their suffering and that there is no place for famine in the twenty-first century.”

The EU Commissioner for Crisis Management, Janez Lenarčič, said, “The humanitarian consequences of the historical drought affecting the Horn of Africa are dramatic. Between 15 and 16 million people are already affected by the drought and in need of life-saving assistance.”

In light of experience gained on the visit in Baidoa and UK having more presence on the ground, Amb Foster reiterated, “In essence, the situation is so severe that we need to focus very much on lifesaving activities. So for us (UK) that is about provision of emergency feeding support to those children who are most severely malnourished.”

In addition, she noted the need to take care of health of the children.

“[There is a need to] treat diarrhoea, cholera and measles... In fact, when children are so malnourished, its infections and diseases that kills them mostly rather than starvation.”