The PM's visit comes days after returning from Kenya, where he held talks with Uhuru on the restoration of the relations. 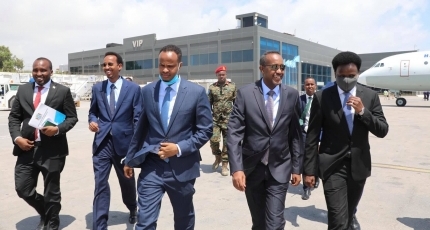 Sources told Keydmedia Online that the two leaders are expected to hold talks to discuss bilateral relations as well as regional and international developments.

KON reported PM's trip on August 11, 2021, and it is aimed at improving ties between the two Arab league-member countries, which has been a low point over the past four years after Farmajo sided with Ethiopia against Egypt on the Nile dam dispute.

Egypt's visit marks the 5th overseas trip by PM Roble since assumed office last year following the ouster of Hassan Ali Khaire by Farmajo through a vote of no confidence in parliament after a fallout.

The Prime minister visited Saudi Arabia, Djibouti, the United Kingdom, and Kenya, where he recently returned after talks with Uhuru on the restoration of the diplomatic relations between the two neighboring countries.

Kenya and Somalia agreed to reset their ties in May 2021 after six months of hiatus, thanks to Qatar which has mediated between the two nations embroiled in the Indian Ocean Maritime boundary row since 2010.