Eight militants sentenced to death in Puntland for attacks

Puntland has carried out a mass execution of the highest number of terrorists last month as part of its fight against terrorism. 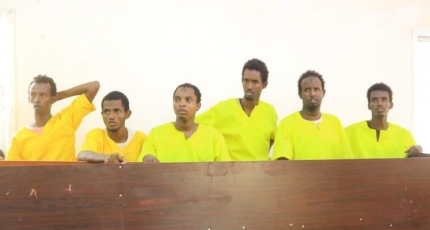 GALKAYO, Somalia - Eight operatives from the Al-Shabaab outfit were on Wednesday sentenced to death by a Galkayo-based Puntland military court for involving attacks and targeted assassinations in the central city for the past 13 years.

A court judge pronounced the verdict as the convicts were brought to the court to face the trial in person, adding all were found guilty of being members of Amniyat, the group's intelligence wing, which is responsible for the suicide attacks and assassinations in Somalia.

The statement from the regional army court said the defendants were given one month to appeal against the death sentence or they will face the firing squad.

This is the second biggest number in history sentenced to death at one time in Puntland state since last month when it killed 21 militants in Garowe, Qardho, and Galkayo for attacks.

The militant group lost many of its members and commanders including its leader Ahmed Godane to the US airstrikes, some were either jailed or executed in different parts of Somalia.