Election talks in Mogadishu go into a second day

The PM is leading the efforts to hold a peaceful election in Somalia after Farmajo's failure. 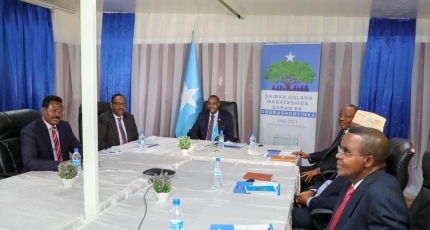 MOGADISHU, Somalia - Somali PM Mohamed Hussein Roble and leaders of the regional states are holding a second round of top-level talks on the forthcoming elections in the country.

Senior aides to the PM brief the leaders at Afisyoni tent on the work of the election preparation, including polling stations, two locations for each Federal State, and one in Mogadishu, where the MPs will be picked by electoral delegates.

"The National Consultative Council [NCC] will listen to a report from the Technical Electoral Support Team on the draft technical plans for the upcoming elections," said Mohamed Ibrahim Moalimuu, the spokesman for the government.

The sides have agreed to continue the negotiations for days to "narrow down differences" and seek an effective solution to the challenges ahead of the elections with sources telling Keydmedia English that there will be an extension of the two-month election deadline.

Somalia has missed its elections twice this year due to a political crisis and an attempt by outgoing leader Farmajo to stay in power beyond his mandate in a bloodless coup that ended in failure after violence in Mogadishu last April.