Ethiopia has a heavy presence of troops in the regions of Southwest State, some are not part of the African Union Mission in Somalia. 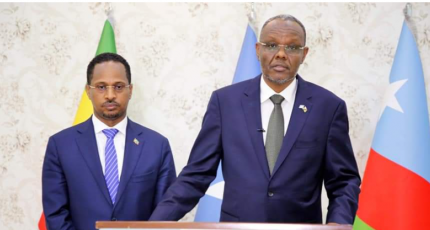 Lafta-Garen, a key ally of Farmajo received the Ethiopian diplomat at his office on Sunday morning and discussed the long-standing relationship between Somalia and Ethiopia.

The regional leader said he requested the Ethiopian government to increase support and efforts in the fight against Al-Shabaab in Southwest State and help in the security sector.

The President of the Southwest State of Somalia said that Ethiopia is a constant and reliable friend that is different from other countries assisting the nation in counter-terrorism.

Ethiopia has a heavy presence of troops in the regions of Southwest State, some are not part of the UN-mandated African Union Mission in Somalia [AMISOM] based in Mogadishu.

In 2006, Ethiopian troops have invaded Somalia to give the U.S.-backed Somali government led by late president Abdullahi Yusuf support in curbing the Islamic militia’s increasing power.

Since then, the Ethiopians didn't withdraw and have committed atrocities in the country. Last year, they shot down a plane carrying relief supplies near Berdale airstrip, killing six people.