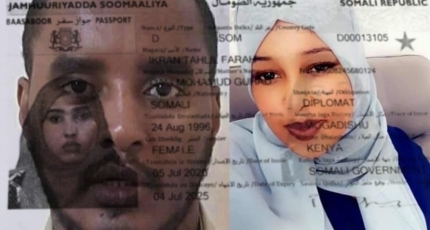 MOGADISHU, Somalia - The inquiry team tasked with the investigation in the disappearance of the spy agent Ikran Tahlil by PM Roble in Sep has released a preliminary report on Sunday.

The report cleared Fahad Yasin, former NISA director Fahad Yasin, and his close associates, including Abdullahi Kulane and his successor Yasin Farey of all charges in the murder.

Gen Abdullahi Bulle Kamey, the prosecutor of the Somali military court who read out the report on the State TV said the 25-year-old girl was abducted and killed by the Al-Shabaab.

This was the same statement released by NISA in early September 2021 which said its cybersecurity head fell into Al-Shabaab's hands. The group distanced itself from the claims.

The girl who worked with the slain Mogadishu mayor Eng Yarisow as secretary disappeared in June 2021. She joined the notorious spy agency in 2017 under Fahad Yasin's leadership.

Qali Guhad, the mother of the missing girl filed a lawsuit against Fahad Yasin and 3 other top NISA officials in the military court, seeking justice for her daughter through legal means.

Fahad Yasin was sacked as NISA head by the PM in Sep. after he was convicted and sued at the court. But, Farmajo has appointed him as his national security advisor to get impunity.

Ikran was targeted for having classified information about the assassination of the Mogadishu mayor and the recruitment of thousands of youths sent to Eritrea for training in 2019-2020.