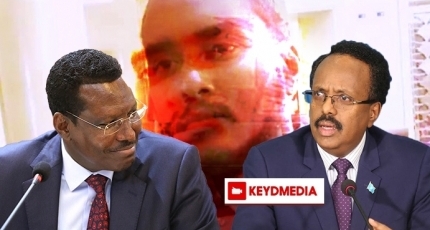 MOGADISHU, Somalia - Galmudug president Ahmed Abdi Karie who is considered one of Farmajo's greatest allies received Fahad Yasin at his residence in Mogadishu on Sunday night.

Fahad who was sued at military court for the murder of Ikaran Tahlil, a top intelligence female officer has recently returned to the capital from Turkey amid a simmering political tension.

The talks between Qoorqoor and the former NISA director focused on Farmajo's plans towards the election following the collapse of the mediation efforts to end the standoff with PM Roble.

The insiders say Farmajo plots to disrupt the parliamentary election in Somalia to consolidate his grip on power. He sees the political rift as a chance to prolong his stay in Villa Somalia.

Farmajo's right-hand man who is still being guarded by the Waran forces of NISA showed that he still has an influence in the US-funded National Intelligence and Security Agency.

Somali PM sacked him early this month over the killing of Tahlil, who served as NISA's cybersecurity expert. His ouster sparked a power struggle between the top leaders of Somalia.

Farmajo appointed him as his new national security advisory, a move that many believed to be a cover-up and attempt to avert Fahad from being prosecuted for Ikran's assassination.

The leader of Galmudug has failed his leadership and became a servant for Villa Somalia and is working in the interest of Farmajo instead of his Federal State, according to his critics.

Qoorqoor, who spends most of his time in Mogadishu turned a blind eye to the security crisis in Galmudug, most notably the return of Ahlu Sunna and the ongoing clan war in his region.