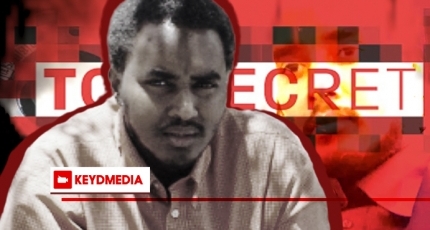 MOGADISHU, Somalia - Fahad Yasin, one the most powerful man in Somalia who served as the intelligence chief is facing one of the most difficult challenges in his life after being denied entry to the country on Friday.

Turkish Airlines flight carrying Yasin was diverted from Djibouti and forced to return to Istanbul after authorities in Somalia informed that it could not land at Mogadishu airport with the ex-NISA boss who is accused of having a role in the murder of Ikran Tahlil.

Tahlil was the head of NISA's cybersecurity department. She went missing on June 26 after being abducted from her house and after nearly three months of search, the spy agency announced the intelligence officer was killed by Al-Shabaab, a claim that the terrorist group has denied.

Abdirashid Mohamed Hashi, head of communications at Farmajo's office, accused the Djiboutian government of arresting Fahad Yasin, calling the move illegal, and could damage the relations between the two countries.

Djiboutian Foreign Minister Mahmoud Ali Youssouf has immediately denied the allegations from Farmajo's office as baseless and unfounded claims, adding that the Turkish plane with all its passengers, included Fahad Yasin.

The minister said the fake news on social media was an attempt to create confusion and drag Djibouti into Somalia's internal challenges and crisis. "We will continue to stand by our brothers and sisters in Somalia but never interfere in their internal affairs".

The Somali government said Fahad was “mobilizing” NISA forces at Mogadishu airport to protect him from rival soldiers who arrived in the facility to arrest him upon arrival, per sources.

Fahad Yasin and senior members of NISA, including Abdullahi Kulane and Yasin Farey, are under investigation after the Ikran family filed a lawsuit against them in a military court last week.

The ex-NISA chief is the prime suspect in the murder case of the senior intelligence officer that sparked the worst political crisis in Somalia and a power struggle between Farmajo and Roble.