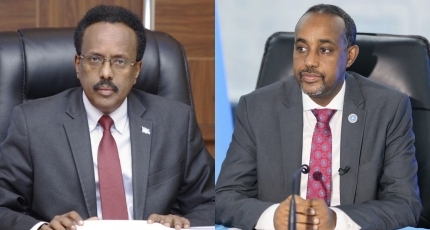 MOGADISHU, Somalia - Internationa pressure is growing on the outgoing Somali president and PM Roble to find an immediate solution to their deepening political gridlock through dialogue.

The European Union (EU) has called on Farmajo and Prime Minister Roble to put aside their differences that have escalated in recent days over the slain NISA female agent Ikran Tahlil.

The EU also said in a statement that the election process should be conducted peacefully in line with the previously agreed timetable for 27 May by the Somali regional leaders and the PM.

"This is key to the well-being of the Somali people. All stakeholders in Somalia must maintain the overall stability of Somalia and the region," The statement from the European Union said.

The statement comes as the international community on Friday issued a press release on Somalia's current situation, especially the political tension between Farmajo and PM Roble.

The ongoing dispute has sparked calls from the UN Security Council and the US, who urged the leaders to resolve their standoff that is throwing the fledgling government into a dilemma.

The situation soared after the PM fired the powerful spy director Fahad Yasin over the murder of Ikran Tahlil, a move that Farmajo opposed. Yasin is now the president's security advisor.

The tug of war between leaders puts the country at risk as the international partners warned. The election was delayed thrice due to the political conflict and the power struggle.