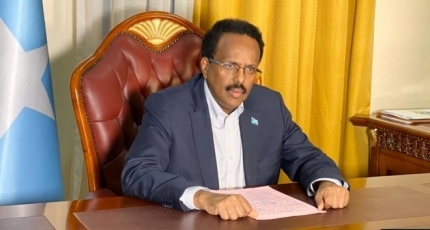 MOGADISHU, Somalia – The outgoing president of Somalia Mohamed Abdullahi Farmajo made his brother a millionaire within a short period of time as time has come to leave Villa Somalia.

The incumbent allowed the importation of the narcotic leaves known as Khat from Ethiopia into the country and let his younger brother Hassan Farmajo make money from the lucrative illicit business.

On the same day, the government has flagged off the 5000 tons of fish to Addis Ababa. The news went viral on social media as Somalis at home and abroad condemned the deal to swap seafood with dangerous drugs prohibited its consumption and trade from most of the developed countries just like the EU and North America.

Farmajo praised the truce and authorized Khat imports in the interest of his brother, ignoring the negative impact on the public health and economic disaster as the country loses millions of USD each month.

At least 18 planes carrying khat land at Mogadishu airport every day, and the revenue estimated $45,000 is shared between the Minister of Civil Aviation Duran Farah, Hassan Farmajo, and Ali Yare, Mogadishu deputy mayor on security.

During Farmajo’s four-year damaging presidency ended last February, corruption and nepotism in Somalia had reached the highest level as he appointed every important public office to his relatives.

Somalia, one of the poorest countries in the world had been the largest market for Kenya’s Miraa for decades during the lawlessness and lack of strong running government, making $2.5 million per month.

The leader placed a ban on Miraa after the outbreak of Covid-19 in the country that followed by a cut-off of diplomatic ties with Kenya in December 2020 over Nairobi’s alleged meddling in Somalia’s affairs.

Many people say Farmajo has taken this step for his re-election campaign and please PM Abiy Ahmed, who formed a tripartite East Africa alliance between Somalia, Ethiopia, and Eritrea alliance in 2018.