Ethiopian PM has been an ally to Farmajo for the past three years and helped him reconcile with Eritrea's dictator. 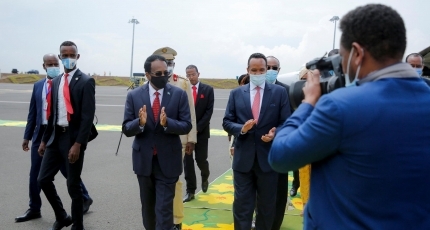 ADDIS ABABA, Ethiopia - The Outgoing Somali President Mohamed Abdullahi Farmajo has arrived in Addis Ababa today after being invited to the inauguration ceremony of his biggest friend in the Horn of Africa, Abi Ahmed, who was sworn in as Ethiopia's PM for the next five years.

African leaders are attending the inaugural event, who took the oath of office on Monday morning following his party's victory in the parliamentary election in the country last June. The new government formed today has brought Abiy Ahmed once again to the Premiership.

During his stay in Addis Ababa, according to the sources, Farmajo will say goodbye to Abiy Ahmed as his term ended in February of this year and Somalia is undergoing parliamentary elections to elect MPs who will vote for a new president to replace Farmajo.

Abiy Ahmed and Farmajo have worked closely together for the past three years, and have tried to form an alliance in the Horn of Africa with the Eritrean dictator Isaias Afwerki to rule beyond their mandates but these efforts have not been fruitful.

Farmajo attempted to stage a bloodless coup in Somalia after extending his term by two years in April this year, which was opposed by the public and the national salvation forces that led to violence in the capital, Mogadishu, risking the country slide back to the civil war.

Farmajo's public support has greatly declined in recent years during his tenure as he has committed serious crimes, including the rendition of Qalbi Dhagah, a Somali citizen to Ethiopia.