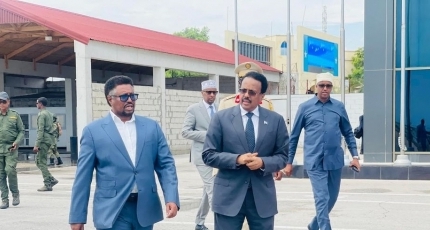 MOGADISHU, Somalia – The term-ended Somali president Mohamed Abdullahi Farmajo jetted off to Qatar on Monday as the election in the country was marred by fraud and irregularities.

The presidency said Farmajo’s trip came after he received an invitation from the Emir of Qatar Sheikh Tamim to attend the 2021 FIFA Arab Cup to kick start in Doha on Tuesday.

However, the Keydmedia Somali service has learned the president is seeking funds for his re-election from Qatar, which invested millions of US dollars in his February 2017 election win.

Earlier this month, Keydmedia reported that a plane carrying cash from Qatar in suitcases landed at Aden Adde International Airport. The money was channeled through Fahad Yasin.

Doha is trying to help Farmajo retain his seat as president of Somalia, after he became the most loyal servant at Villa Somalia during his four-year tenure, carrying out its interests.

He was accused of being the mastermind of the murder of senior female spy agent Ikran Tahlil Farah, who was abducted in June this year and subsequently killed within NISA.

His accomplices Yasin Farey, Abdullahi Kulane, and Abdikani Wadna-qabad are among the suspected murderers of the girl, 25, educated in the UK who worked for NISA since 2017.

The girl was serving as NISA’s cybersecurity expert. The spy agency said she was killed by Al-Shabaab, however, the terror group rejected the claims and distanced itself from the case.