Somali Police Chief together with Turkish Counsellor for Security and Interior Affairs attended the farewell ceremony held at Mogadishu Airport. 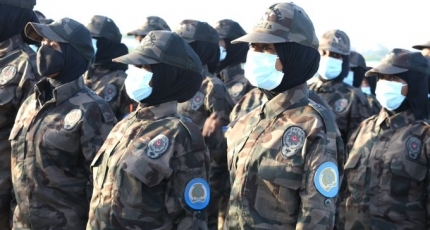 MOGADISHU, Somalia - A new batch of female police officers on Tuesday left Mogadishu for Turkey to get additional training, the Turkish embassy in Somalia has announced.

Special military aircraft has landed at Aden Abdulle International Airport early in the morning to transport 49 female officers from the Special Unit of Somali Police Haramcad to Turkey, where they will receive advanced training.

Somali Police Chief together with the Turkish Counsellor for Security and Interior Affairs attended the farewell ceremony held at the Airport which is largely protected by AU troops.

Turkey, a key partner of the Somali government has already trained thousands of Somali military and police officers as well as airmen and commandos in its country under a military cooperation pact that allowed Ankara to build its largest overseas base in Mogadishu in 2017.

During Farmajo's 4-year presidency, the Turkish-trained and equipping troops, particularly the Gorgor Commando Brigade of the national army and the Haramcad, the Special Police Unit were used to silence the government critics and press freedom.

The Turkish-trained troops who are the best-skilled units in the Somali national army [SNA] are involved in politics and are used by the top government officials for their own interests.