Local residents appealed to the UN and the government of Somalia to deliver immediate humanitarian support to the drought-affected people. 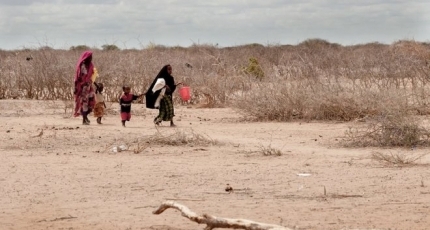 KISMAYO, Somalia - In recent months, a severe drought struck many parts of southern Somalia, where the people are currently dying of thirst and hunger in some areas around Kismayo.

A 12-year-old boy has died of thirst-related complications in a small rural village in the western part of Kismayo, 500Km south of Mogadishu. The pastoralists and farmers are the most hit.

Isse Ahmed, a resident of Bulo Haji said water wells in his village and the nearby Abdalla Birole, and Bar-Sanguni between Kismayo and Hosingow dried up, putting the people at risk.

The locals lost their livestock in the past two months and called on the Somali government and aid agencies to provide immediate assistance to those affected by the drought.

The pastoralists began to flee their areas in search of water and pasture in other parts of Jubaland.

The United Nations [UN] office in Mogadishu estimates that millions of people in Jubaland and other regions in Somalia need food aid after the expected Gu' rains failed this year.