Illegal fishing has been on the rise since the collapse of the former central government in 1991. 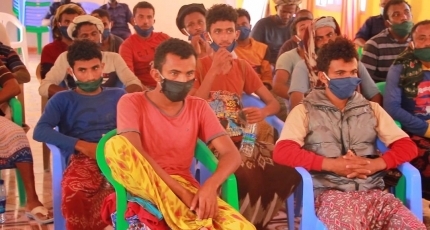 GALKAYO, Somalia - A trawler and more than 30 Yemeni fishermen have been arrested in Somali waters after having been caught on illegally fishing, using illegal nets, and has been ordered to pay a fine.

According to Galmudug authorities, the foreign fishermen were illegally fishing in the territorial waters of the country on the shore between Hobyo and Harardhere before their capture by regional coastal guards.

They have been put a court in Galkayo under Galmudug which slapped them with a harsh penalty charging each person a $700 fine, per the judge's statement. At least 8 underage teenagers out of the 38 in total were acquitted, escaping from the sentence because they are minors.

The Yemeni fishermen are reported to have conducted illegal fishing activities over the last years off the Somalia coast. They will remain under custody until they pay the fines.

Somali coastline has inseparably become no man’s land and eternal enriched hub for many foreign ships carrying out illegal fisheries since the collapse of the country’s central government led by Dictator Siad Barre.