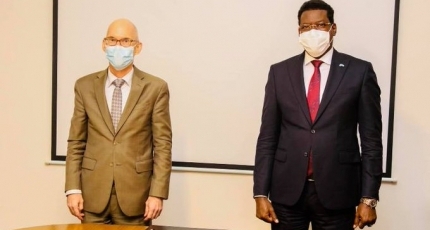 MOGADISHU, Somalia - The leader of Galmudug State, Ahmed Abdi Kariye alias [Qoor-Qoor] has arrived on Tuesday morning in Mogadishu after paying a 10-day visit to Turkey.

Upon his arrival in the capital, he met with the US Ambassador for Somalia, Donald Yamamoto, and UN Representative James Swan.

The two – Yamamoto and Swan – had discussed the current political turmoil surrounding the election process with Qoor-Qoor ahead of the much-anticipated conference between Farmajo and regional leaders in Mogadishu.

The foreign diplomats made efforts to bring the sides together after the outgoing President failed to persuade regional state leaders to proceed with the electoral talks seeking common ground on the next polls.

The Information Minister of Galmudug, Ahmed Shire Falagle has recently told the press that they are whole-heartedly ready to participate in any conference invited by Farmajo.

It's unknown what is in store for Qoor-Qoor so far, with some sources suggesting that he is working with Farmajo on a plot to derail the planned talks brokered by the international community.