Minister and security officials escorted the Darwish soldiers to the new presences where militants are feared to take over as they lost control of Bacadweyn. 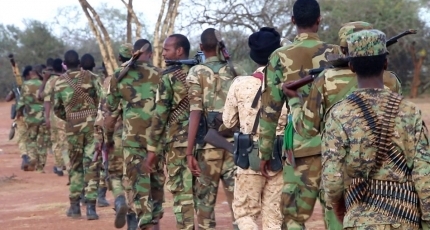 Several regional ministers and security officials have accompanied the Darwish soldiers readied to launch an offensive against Al-Shabaab and recapture Bacadweyn from the militants.

Galmudug security has been worsening in the past few months as the state leader, Ahmed Abdi Karie alias (Qoorqoor) is in Mogadishu working on the term extension of the outgoing President, abandoning his duty.

Al-Shabaab has managed to regroup and take control of large territories in the state, opening a new front in central Somalia.

Sources said Puntland reinforcing Galmudug with its special forces in the offensives against militants to liberate Bacadweyn – a key strategic town for Mudug security.

Since the US ceased airstrikes, the group has launched attacks in Puntland and Galmudug.