The president has recently paid visit to Southwest, Galmudug and Puntland as part of his efforts to heal the wounds left behind by Farmajo. 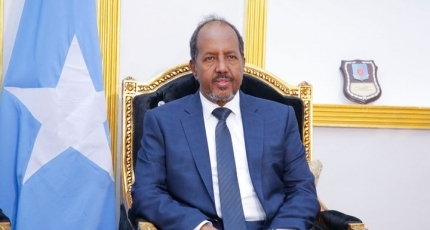 MOGADISHU, Somalia -The president of Somalia is expected to call for a meeting with the five Federal States in the country in the coming days to reconcile and resolve the differences, sources said.

The upcoming conference will be the first between the leaders of the regional states and Mohamud since May 15 election in Somalia.

Villa Somalia sources say the president is unhappy with decision by the Federal states to suspend cooperation with his government after a dispute over $100 million financial aid from thee world bank. This could derail the state-building process and the debt relief program.

At his innaguration, the President pledged he will leave no stone unturned to realise his goal - Somalia at peace with itself and the world.

Puntland and Southwest already started to create an environment of political crisis, a move that would be roadblock to Mohamud's administration.

It's unclear if the president will succeed in his efforts to reach a consensus with the regional leaders to move Somalia forward.

The Federal Government and Federal Member states are the stakeholders of the country and their close cooperation matters.