When will President Hassan Sheikh pick Somalia’s next PM?

It's almost a month since he was elected as the 10th Somali president in Mogadishu by the 329-seat Federal Parliament during an indirect election. 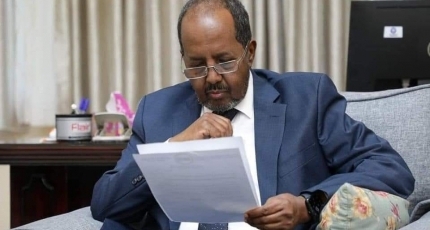 MOGADISHU, Somalia - Hassan Sheikh Mohamud, the new Somali president is expected to announce a prime minister in the coming hours or days, according to sources within Villa Somalia.

The president is holding final consultations with his inner circle, advisers, and the presidents of Jubaland and Puntland Said Abdullahi Deni and Ahmed Madobe who played a role in his election.

It's unpredictable who will be the new PM, but Keydmedia Online sources say Mohamud is seeking a new face and political novice who can lead the country to peace, prosperity, and democracy.

It's almost a month since he was elected as the 10th Somali president in Mogadishu on May 15 by the 329-seat Federal parliament. He has got 30 days to name the PM and time is running out now.

According to the clan-based power-sharing model in Somalia, the new prime minister will come from the Daarood tribe, which held the presidency for the past five years.

During his previous term, Hassan Sheikh changed several prime ministers within four years due to frequent fallouts, a culture that has been common in the country's governance system and politics.