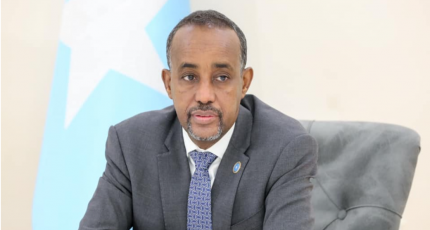 MOGADISHU, Somalia - Somali PM says he will continue to pursue the prosecution of the culprits responsible for the murder of Ikran Tahlil, the spy agent who went missing last June.

During a meeting in Mogadishu on Sunday, Somali PM Mohamed Hussein Roble has told the UN's deputy chief, Amina Jane Mohamed, that an independent probe will be done.

"My position in principle is for the Ikran case to receive a credible and independent probe and for all obstacles to justice for her and her family must be removed," he added.

Prime Minister Roble stressed that the Ikran case is not politicized and is only seen as a right of a Somali citizen and should end up in a court in accordance with the country's law.

Roble stated that justice for Ikran will be one of his topmost priorities and his government would not leave any stone unturned to ensure this case as it attracted the public attention.

He thanked the UN and the international community for their full support in this challenging time in seeking an investigation into the murder of the 25-years-old senior NISA officer.

As the PM raised the issue at the meeting with the UN delegation, the president whose term ended in February 2021 still remained silent on the mysterious killing of Ikran Tahlil.

The educated girl was abducted almost three months ago from her house around the headquarters of the heavily fortified spy agency in Mogadishu and was subsequently killed.

A week ago, NISA issued a statement announcing Tahlil has fallen to Al-Shabaab's hands and was murdered by the terrorists. The group strongly denied the claims as fake and baseless.

The case created a political deadlock between the Prime minister and the outgoing president Mohamed Abdullahi Farmajo who is defending the suspects - Fahad Yasin and Kulane Jiis.