IGAD says no evidence that Kenya interfered in Somalia’s affairs

Speaking to the reporters in Mogadishu on Wednesday, Somalia’s information minister Osman Dubbe said the report came as a shock to Farmajo administration, adding it leaves a stain on Somali-Djibouti ties. 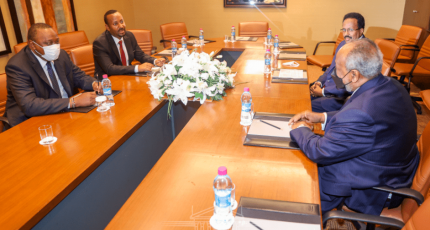 MOGADISHU, Somalia - IGAD’s fact-finding committee has released a report on Wednesday after a two-month investigation into claims by the Somali government that Kenya was interfering in its internal affairs.

The report was immediately rejected by the Somali Government as “biased and one-sided”, accusing Djibouti of portraying partisan after the team went to Mandera twice but declined to visit the other side, the Gedo region.

The committee was formed during the 38th IGAD Summit in Djibouti on December 22 that came after Mogadishu sent a complaint letter against Kenya to Abdalla Hamdok, the chair of the East African bloc.

Somalia has blamed Kenya for arming militias inside Mandera to attack Somali forces in Beled-Hawo town and destabilize areas in Somalia along their shared porous border.

Last Monday, at least 11 people were killed during clashes between the Somali army and Jubaland state forces in Beled-Hawo. Mogadishu said pandits trained inside Kenya attacked the border town and were overpowered.

Speaking to the reporters in Mogadishu on Wednesday, Somalia’s information minister Osman Dubbe said the report came as a shock to Farmajo administration, adding it leaves a stain on Somali-Djibouti ties.

"The Federal Government of Somalia calls for an immediate withdrawal of the baseless and unfair report and demands an apology, failure to which Somalia is considering withdrawing from IGAD,” he added.

The fact-finding commission is composed of diplomats, military officers, and other officials from Djibouti that was appointed by President Ismail Omar Guelleh on behalf of IGAD.

For its part, Kenya welcomed the report by the IGAD team that visited both Nairobi and Mogadishu to establish facts of the border, says allegations raised by Somalia were unfounded.

IGAD described disproportionate and unproductive the decision of Somalia to severe diplomatic ties with Kenya last year over meddling in the country’s internal politics.

Kenya contributed about 4,000 soldiers to the AU mission in Somalia [AMISOM] which is providing support to the government in Mogadishu in the fight against Al-Shabaab militants.