Somalia at risk of Famine

Inaction on Somalia drought could cost hundreds of thousands of lives: UN

Half of the population is in need of some form of humanitarian assistance. That is 7.7 million. Amongst those, six million need food assistance. As for those impacted by the drought, they're estimated to be 4.9 million. 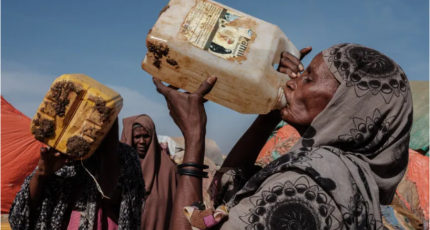 Hawa Mohamed Isack, 60, drinks water at a water distribution point at the Muuri camp for IDP in Baidoa - AFP photo

MOGADISHU, Somalia - A worsening drought, COVID-19, and the impacts of the war between Russia and Ukraine are creating an increasingly dire situation in Somalia, says the UN humanitarian coordinator for the country.

In February, the UN World Food Programme said that 13 million people across the Horn of Africa face severe hunger.

Adam Abdelmoula says if something isn't done soon, it could cost thousands of Somalian lives. Here is part of his conversation with As It Happens guest host Dave Seglins. He said Somalia is facing drought, along with impacts from COVID-19 and the war in Ukraine

How is this crisis specifically affecting children?

The children are the most affected.

[About] 350,000 are estimated to face very, very dire outcomes if we don't intervene and scale up our interventions between now and June. What that means in simple terms is that if we don't do enough, those 350,000 children are going to die by the end of June.

I visited a children's hospital operated by an NGO in Dolow, and it is not only the children that are malnourished and admitted to the hospital that has only a capacity of 50 beds but also their mothers are malnourished. And these are all children between the ages of a few months to two years.

Half of the population is in need of some form of humanitarian assistance. That is 7.7 million. Amongst those, six million need food assistance. As for those impacted by the drought, they're estimated to be 4.9 million.

You mentioned the situation in Ukraine affecting the supply of food and therefore the prices in Somalia, but also the world's attention is turned away from places like Somalia. You've [told AFP] that Somalia has "lost the CNN effect," so to speak. What did you mean by that?

So all these newly emerging crises keep pushing Somalia's crisis to the back burner. And the world's attention has shifted away from this very chronic, protracted crisis that has been in existence for almost three decades now.

Consequently, I predict that all the things that we have seen in the past when the world turned its attention away from Somalia might re-emerge again. And by that, I mean piracy, terrorism, mass migration, and mass starvation. We have seen that in the past, and all of this could come back again to haunt all of us.

Last year, you visited five European capitals, as well as Washington, D.C., to raise these issues [and] put Somalia back on the map. Do you feel like you were heard?

To some extent, yes. That was last year in the summer. Because of that visit that took place in the month of October, [during] October, November, and December, our funding levels for the previous humanitarian response plan saw an increase of 25 percent.

As to this year's response plan that is seeking $1.5 billion [US], we are only four percent funded. And that is why we are calling for a roundtable discussion on the Horn of Africa that's going to take place in Geneva next Tuesday.

There has been criticism of humanitarian groups and the UN's efforts. I'm reading in the Guardian from last week, one organizer complaining that humanitarian groups ... have been complicit with the Somali government, that the funding is bogged down in politics, that funds are being misallocated. How do you respond to that criticism?

That kind of accusation is just simply inaccurate. We have absolutely no desire to confuse what the UN is doing with what the government is doing.

Our work is completely based on the four core humanitarian principles of independence, impartiality, neutrality, and humanity. We go where the needs are greatest.

We are facing funding shortfalls, and when that happens, people tend to scapegoat the UN, that the UN hasn't done this, hasn't done that. Everything that we do is completely transparent.

What message do you want to get out to people about the costs of inaction in Somalia?

The cost of inaction could be in the hundreds of thousands of human lives. That's the immediate thing we are looking at is a situation that is fast evolving into a perfect famine storm. Unless we scale up our responses, that is what we are looking at.

I can't afford to be hopeful. We have to keep the hope that the world will pay some attention to this human tragedy that is evolving and that we will, despite all the attention that is given to other crises, will get some attention here and that some resources will come, and that will come in time for us to save as many lives as we can with the little resources that we have received.

We have been able, just in the past months, to construct 42 new boreholes and rehabilitate 56 older ones. Also, we managed to vaccinate 1.23 million children, and among those, those were mostly routine vaccinations. But we added another 500,000 vaccinations targeting those affected by a measles outbreak.

So despite all the funding shortfalls between January and February, we reached 2.3 million people who could survive.

We are trying, but resource limitations are the biggest challenge we are facing.