They called on Somali political leaders to set a timeline for the completion of the elections that is realistic, achievable, and to which all the Federal Member States leaders genuinely commit. 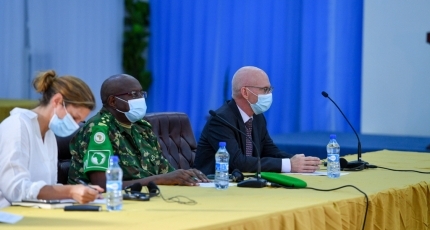 MOGADISHU, Somalia - The international community has shown that it is running out of patience with Somalia's troubled elections due to the failure to hold them on time last year.

After talks with the prime minister of Somalia Mohamed Hussein Roble and heads of regional states in Mogadishu, the foreign diplomats said there is not much time left for the election.

The NCC should set a timeline for the completion of the election that is realistic, achievable, and to which all the Federal States leaders genuinely commit," they added.

They urged the Somali leaders to correct the irregularities seen in the parliamentary election to make the process more transparent, credible, and acceptable by all political stakeholders.

The electoral process was hijacked by leaders of the regional states who have more power in the exercise given by the Sep 17 election deal which allows Somalia to hold an indirect ballot.

We, the international community, have been your steadfast and patient partners. But that patience has limits.

Somalia failed to pick a new parliament and president last year due to the endless cycle of political disputes, mainly pitting the outgoing president Mohamed Farmajo and his PM Roble.

The international partners pressured the leaders to lower the tensions, show restraint, reduce confrontation, refrain from taking decisions without consultation, and avoid the use of force.

The international community is providing 90% of the funding for Somalia's elections, with the government providing 10%, indicating that the country is heavily dependent on foreign aid.