The Senate election was marred by irregularities and massive corruption as regional leaders picked who they want to join in the parliament. 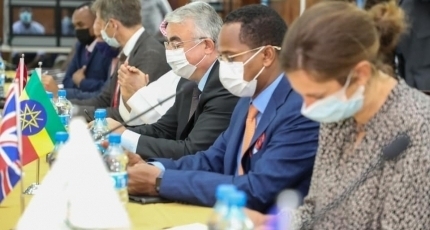 MOGADISHU, Somalia - The foreign diplomatic missions have released a joint statement to welcome the outcome of a consultative forum on Somalia's troubled electoral process held in Mogadishu August 21-22.

They commended Somali PM Mohamed Hussein Roble and the Federal Member State leaders for their constructive discussions aimed to resolve the challenges that are obstructing timely and inclusive elections in the country.

In the statement, the international community called on the National Consultative Council to address the concerns that have been raised over the Upper House election process after it was marred by irregularities and massive corruption as the leaders of the Federal States picked who they want to join in the parliament.

"We also note concerns that have been raised regarding the Upper House process and call on the NCC to address these issues in support of a transparent, timely, inclusive and credible process for the House of the People elections," reads the statement in part.

The partners emphasized the need to ensure the 30% quota for women's seats in the upcoming Federal parliament which is made up of 275 Lower House seats and 54 Senate seats which will elect the new president on Oct 10 as planned.

"Recalling that 24 percent of the Upper House seats have so far been filled by women, we call for the redoubling of efforts to achieve at least the 30 percent quota of seats in both Houses of Parliament going to women," they added.

The international community has failed to pay the financial assistance requested by the Somali government to facilitate the election which faces other obstacles, including disputes and security threats.

The opposition presidential candidates have recently boycotted a new Lower House election roadmap proposed by the Federal and State leaders which disbanded the registered 135 elders who have been instrumental for the parliamentary elections since 2016.