Kenya reopens its embassy in Somalia after months of closure

The relations between the two countries have been at the lowest point for the past eight months after Farmajo cut off ties with Kenya in December 2020. 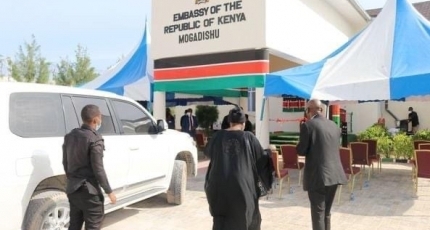 MOGADISHU, Somalia - Kenya's foreign affairs minister Raychelle Omamo together with her Somali counterpart Mohamed Abdirizak on Monday reopened her country’s embassy in Mogadishu after it was closed eight months ago because of strained diplomatic relations.

The visiting foreign minister said she is pleased to reopen the embassy after Kenya had spent eight months without representation in its neighboring country, sharing such important trade and security cooperation.

“I hope my visit marks a positive turning point and paves the way for more cooperation in this critical juncture of electioneering period that Somalia stands at,” Omomo said at a joint news conference after the reopening of the Embassy.

Somalia sent its ambassador Mohamud Ahmed Nur Tarsan back to Nairobi last July to resume his diplomatic work in Kenya after the two countries agreed to restores all relations in May following Qatar mediation.

The ties between the two countries have been at the lowest point for the past eight months after Farmajo cut off ties with Kenya in December 2020 for his re-election purpose, accusing Nairobi of meddling in Somalia's election.

Kenya is one of the East Africa troop-contributing countries to the AU mission in Somalia [AMISOM], joined in 2012 a year after KDF concluded the "Operation Linda Nchi" launched in response to kidnappings and cross border attacks by Al-Shabaab, the Al-Qaeda-linked group.