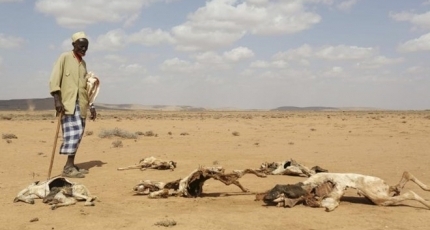 MOGADISHU, Somalia - Officials in Somalia's Jubaland reported a severe drought in parts of the Lower Juba region which hardly hit the pastoralists in rural areas and their livestock.

Mass deaths of cattle began last month, but the average daily loss of animals has risen in the past two weeks as crucial water sources dried up. The grim situation is worsening by the day.

Many of the remaining water wells are contaminated, leading to increased incidents of water-borne diseases such as amoeba, and diarrhea, according to Jubaland's health ministry.

Tens of thousands of people in rural villages around Afmadow, Bandhadhe, Dhobley, Kulbiyow, and Hagar towns were forced to flee because of current extreme water shortages.

Jubaland President Ahmed Madobe has appealed for urgent humanitarian assistance to deal with the drought crisis in the region. He added the people are in dire need of life-saving aid.

The situation was exacerbated by a mass migration of pastoralists with their livestock from drought-hit northeastern Kenya who crossed into Somalia in search of water and pasture.