The outgoing President overstays in power for nearly two months since his term as ruling Presidency ended with no sign of holding an election. 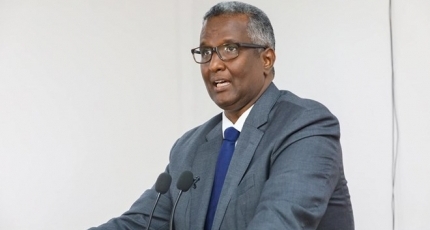 MOGADISHU, Somalia - The outspoken leader of the Wadajir Party, and one of the presidential candidates of the 2021 election, Abdirahman Abdishakur Warsame has called on the citizens to decide the fate of their country dominated by authoritarianism.

According to Warsame, the incumbent leader, Mohamed Abdullahi Farmajo has many things to lose when it comes to the practical reality of leading a nation with democracy and openness and that seems to bother the man whose term ended on Feb 8 and seeking an illegal extension.

“We previously invariably thought that he is going to take over the election by force, but what we see now is total denial and lack of leadership,” he said – urging that citizens could step in and speak out against his futile attempt to seize the nation before its too late.

The firing at protesters including candidates marching in the streets of Mogadishu late last month who were demanding inclusive and free elections to take place in the country is a clear indication of Farmajo's oppression.

"Farmajo closed the roads in Mog to block 15 MPs from entering Parliament. On 19 February he attacked his competitors. The country's regional leaders could not trust him with their lives, came with their troops & camped at Halane. He wants to rule the country by force," Warsame added.

He highlighted that the opposing regional leaders could not rely on his side upon their arrival in the capital for fear of being assassinated – something, he said, his close relative and friends described him as victorious.

The outgoing President overstays in power for nearly two months since his term as ruling Presidency ended with no sign of holding an election.