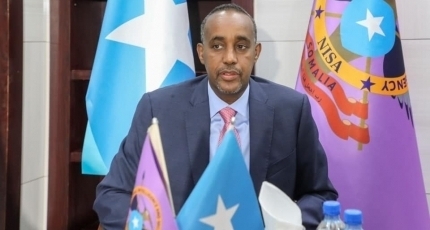 MOGADISHU, Somalia – The prime minister of Somalia Mohamed Hussein Roble has ordered NISA to fully cooperate with the ongoing investigations into the murder of female intelligence agent Ikran Tahlil.

“As you know, Ikran Tahlil’s case remains undecided, so I ask NISA leadership and staff to help a hand in the process to find justice for the girl,” said the premier during his visit to spy agency HQs on Tuesday.

The 25-year-old girl went missing on June 26 of this year after she was abducted from her house in the vicinity of NISA command center Habar-Khadija in Mogadishu. Her mother broke the news of the case.

Farmajo, the outgoing Somali president was accused of frustrating investigations into the controversial kidnap and death of Ikran after he rejected to prosecute the prime suspects, including Fahad Yasin.

Yasin was NISA's boss during the abduction and slaying of Ikran. The girl was holding confidential information about the recruitment of thousands of youths sent to Eritrea who never returned home.

The PM sacked Yasin from his post to prosecute him as he was convicted of the murder along with three other senior intelligence officials, namely Yasin Farey, Abdullahi Kulane, and Abdikani Dhirane.

Farmajo rejected the dismissal and appointment of Bashir Gobe as acting NISA director by PM, a move that many saw as an attempt to cover up the assassination of the spy agent by his close friends.