As Keydmedia Online reported early, the relations between the two top Somali leaders have strained in the past two months. 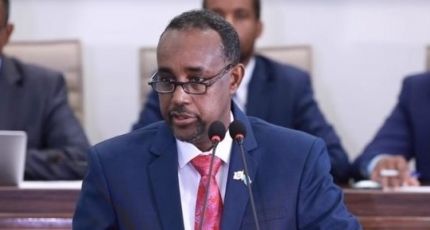 MOGADISHU, Somalia - The prime minister of Somalia Mohamed Hussein Roble has strongly opposed Saturday's presidential decree by Farmajo which bars the government from signing deals with international companies and foreign countries during the election period.

In a strong-worded statement,  PM Roble said Sunday that the executive powers belong to his government and ordered the ministers to ignore the decree from the outgoing president whose constitutional mandate expired on Feb 8 of this year.

"The executive power of the country belongs to the cabinet that will act in with Article 97 of the Provisional Constitution," said the PM in what seems to be a response to the president's decree.

Roble added that until a new Prime Minister is sworn in, he and his Council of Ministers will remain in office and carry out the normal duties of the Government to lead the country to peaceful and inclusive elections which now began in some regional states.

As Keydmedia Online reported early, the relations between the two top Somali leaders have strained in the past two months as Farmajo is unhappy about the PM decisions towards the elections in Somalia.