The leader of Galmudug Ahmed Abdi Karie Qoor-Qoor and outgoing Lower House speaker Mohamed Mursal began mediating between Roble and Farmajo who are in deadlock over Ikran Tahlil’s murder case. 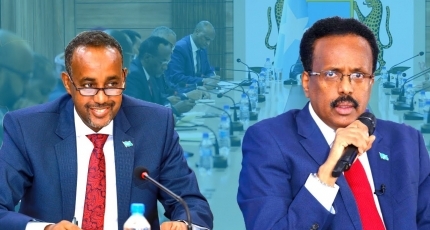 The leader of Galmudug Ahmed Abdi Karie Qoor-Qoor and outgoing Lower House speaker Mohamed Mursal began mediating between Roble and Farmajo who are in deadlock over Ikran Tahlil’s murder case.

The efforts to find an end to the ongoing political crisis in Somalia are on the brink of failure after the PM insisted, he will not compromise in his bid to ensure justice for the slain NISA female official.

Farmajo’s conditions are as following:

1 – To transfer the new security minister Abdullahi Mohamed Nur to the interior ministry
2 - Dropping Ikran Tahlil’s case at the military court, ending it by payment of blood money
3 - Reappointing NISA director by moving Bashir Gobe to another post

Farmajo wants to name NISA head, a move that the PM snubbed as unlawful after he already made the decision of the appointment of Fahad Yasin’s replacement who is Gen Bashir Gobe.

Sources told Keydmedia English that the closed-door talks on their weeks-long rift and arbitration spearheaded by Qoor-Qoor and Mursal have not borne fruits due to Farmajo’s stiff conditions.

The two Somali government leaders are facing mounting pressure from the international community, including the UN security council to resolve their differences give top priority to holding long-delayed national elections this year.

The current impasse has distracted from Somalia’s larger problems, most importantly the fight against Al-Shabaab and the elections which are slowly going on in the regional states.