Protests in Mogadishu over bad roads and lack of sewer system

Somalia is long ranked one of the most corrupt countries in the world. 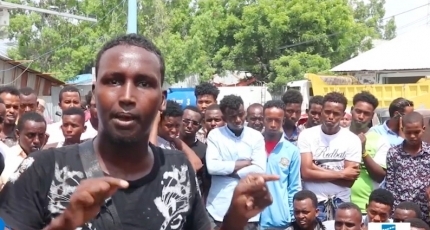 MOGADISHU, Somalia -  Dozens of people have staged a protest against the poor condition of the main roads and lack of sewer system in Mogadishu, the Somali capital on Tuesday.

The protestors mostly rickshaw drivers have complained to municipal authorities who have failed to repair the streets that are inaccessible whenever it rains.

Benadir regional administration was accused of corruption as millions of US dollars collected from the auto-rickshaws as a tax end up in the pockets of the top officials.

Each Tuk-Tuk pays $15 every month and the drivers work in flooded and ruined streets in Mogadishu which affects their operation. Local authorities failed to serve the public.

Somalia is long ranked one of the most corrupt countries in the world due to the lack of accountability resulting from the lawlessness and long conflict in the country.