The election of the parliament has been delayed twice after a political crisis pitting the outgoing president Farmajo and the Federal States. 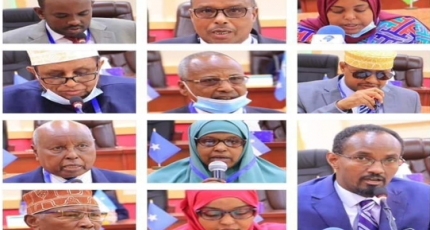 GAROWE, Somalia - Puntland state has elected its 11 senators to represent in Somalia's 11th Federal Parliament following an indirect election in Garowe on Wednesday.

Mohamed Ali Yusuf won easily the second seat after his main challenger, a female runner Kawsar Abdullahi dropped from the poll. Among the winners include members of the Puntland cabinet who will ditch their posts to join the Somali national assembly.

The following are the Senate-elect members:

Galmudug announced it will hold the Senate election on Thursday after President Qoor-Qoor has unveiled the list of six candidates, out of the 8 seats allocated to the state.

Jubaland and Southwest elected four and five senators respectively as the country kicked off elections for representatives of the Upper House following a delay in the voting deadline.