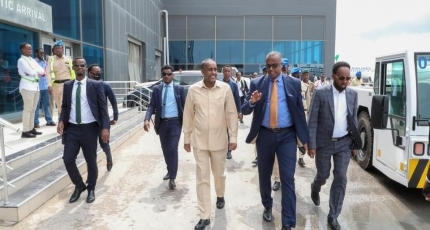 MOGADISHU, Somalia - Prime Minister Mohamed Hussein Roble today embarked on a visit to the Jubaland state of Somalia, his first domestic visit to Kismayo since he took office in 2020, with a focus on solving the election crisis in the Gedo region.

"During his stay, the PM will hold talks with Jubaland leaders, local elders, and sections of the public to discuss the implementation of elections, reconciliation, security, and development in the regional state," said PM's office.

The Prime Minister will lay the foundation stone for development projects that his government plans to implement in Jubaland, a key Somali Federal State that has been ruled by one man called Ahmed Madobe, an ally of Kenya.

Madobe, a former 'high-ranking' Al-Shabab leader controls the strategic southern port city of Kismayo under the protection of Kenyan Defence Forces [KDF] since 2012 and he has been a fierce critic of Farmajo after both clashed over Gedo.

Somali PM, who is a political novice was tasked to lead the country's electoral process last May after the outgoing president failed to do the task during his four-year presidency ended in February 2021.