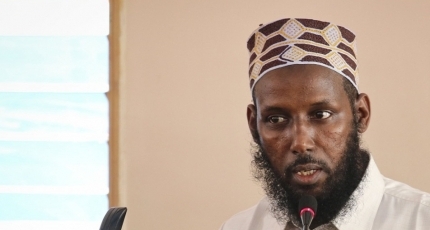 MOGADISHU, Somalia - There are growing concerns raised over the life of former deputy Al-Shabaab leader Mukhtar Robow, who has been under house arrest for almost three years.

The life of Robow was reportedly in danger at a secret NISA prison in Mogadishu since Fahad Yasin's ouster as spy chief over the alleged killing of Ikran Tahlil, a female intelligence officer.

Multiple sources within NISA confirmed to Keydmedia Online that the new Somali security minister has changed the security guards at the house, where Robow is held with trusted officers.

Since Fahad Yasin was removed from NISA, he has still influence in the intelligence agency and could carry out more assassinations against key figures, including officers and informants.

Robow's relatives previously said they fear his safety as he could be killed just like Ikran Tahlil. Since his arrest in December 2018 from Baidoa, Robow was cut off from his family contact.

The new security minister Abdullahi Mohamed Nur, who is a fierce critic of Farmajo appears to have received intelligence that Fahad Yasin intends to kill Robow, in order to blame PM Roble.

Fahad Yasin was named as the new national security advisor to the president to escape from prosecution after the family of Ikran filed a lawsuit against him in the Somali military court.