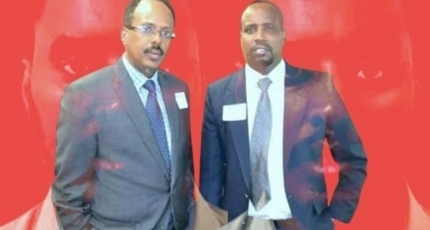 His appointment was not announced through the state media and still remains unclear if the decision was made with the consent of the Prime Minister who is now in London for the Global Education forum.

Kulane was facing allegations of the gross violations of the constitution and abuses against humanity committed in the past three years. He was accused of harassing people in Gedo, mainly Farmajo critics.

The people and the opposition candidates have welcomed the dismissal of Kulane and called to bring him to justice for crimes, including murder, abductions, and recruitment of missing soldiers in Eritrea.

Sources tell Keydmedia Online that the main reason that Fahad and Farmajo reinstated Kulane is to prevent him from prosecution as the military court is investigating the disappearance of a NISA female officer.

Kulane and Fahad have been using NISA as protection since both top intelligence officials have lost public trust and earned more enemies than friends in politics during Farmajo’s 4-year presidency.

His clandestine appointment feared to spark a dispute between the outgoing president and PM Roble whose relations have been at a low point since Farmajo’s attempted 2-year term extension failed in April 2021.

Keydmedia Online has in the past published an exclusive report indicating that the PM rejected a proposal by Farmajo to make a cabinet reshuffle, a move that could have an impact on the elections.